Last year we all heard the little whispers of the importance of Tik Tok and it’s growing numbers. Some excited for the new challenge hopped on immediately. Other scoffed at a platform that was supposedly just a bunch of teens dancing. And yet now, there’s no denying the impact of Tik Tok. Trends that started on Tik Tok are moving to Instagram and Facebook without people even realizing they originated on Tik Tok. The platform is growing at unprecedented rates with people of all ages downloading it in masses.

At this point you can’t deny the impact of Tik Tok. Some of the greatest surprises that I found was watching several videos go viral. As a travel blogger I saw people book trips the next week off of the video they saw. I shared one of my favorite items (not sponsored, something I just genuinely loved and thought others would think it was cool) and was shocked when thousands of clicks were sent to that page. People on Tik Tok are hungry for content!

Now I can’t claim to know the algorithm. I know watch time/completion rate is way more important than likes. I know that you could have 0 followers and have a video go viral on your first go. I can’t tell you why the video I took 2 hours on did bad while the one I took 20 seconds on did amazing. I create content I enjoy and I try not to get so worried when it doesn’t do well.

I’ve had the pleasure of growing 50k followers in 3 months. For reference, it took me 3 years to gain a little over 40k on Instagram so I’m thankful for the platform. The best advice I can give for being successful is to spend hours watching the videos and learning. It doesn’t make sense until it suddenly makes sense and clicks. Mostly, after that have fun! I see people with thousands even hundreds of thousands of followers on IG struggle to grasp why they’re not doing well on Tik Tok. It’s a different platform. It’s a beautiful new challenge and just because you don’t succeed, that doesn’t mean give up. Most of us didn’t grow on our other social platforms overnight.

However, I’m seeing that Tik Tok desperation as soon as people start and that desperation is leading to actions that are sabotaging their accounts. Don’t fall into these trends. I promise they will only make it harder and harder as you go on!

Stop posting on Facebook groups asking people to follow you and follow them back because here’s the thing about Tik Tok. It’s not about your follower count. It’s about how many people are engaged in your video. If I simply follow you because you will follow me back, that in no way guarantees you have any interest in my content. So you follow me and then next time you see my video you will probably scroll past it, because you never cared about my content anyways. Maybe you give it a like, but that doesn’t matter that much either. Now because you’ve scrolled past my video, Tik Tok thinks it’s less interesting and hurts the overall reach. All so I could have an extra follower. Just create good content. You’ll find the right followers will come much easier.

I mean this should have been obvious. They didn’t work on Instagram. You’re engagement already sucks because you did them on Instagram and you have to buy likes so your account looks okay. Well here’s the thing about Tik Tok. It’s the exact same!! We already see it and it’s going to continue to get worse. People with 100Ks followers but only 1k views. Sometimes that’s because one video went viral, sometimes it’s that they’ve grown slowly. Either way, it doesn’t matter. Tik Tok isn’t as much about the follower count as it’s about the video views. So when you get 20k new followers because you did some giveaway, the above is going to happen but 20,000x worse. Now 20K people have scrolled past your video. You never found the people who were genuinely interested in the content you created because it’s never reached them. You are likely trying to grow on Tik Tok because you are a content creator, not a follower buyer. Just do the work you were supposed to do. Stop trying to cheat the system.

Tik Tok is beautiful. It’s main feature is that most people spend time on the FYP. You are reaching new people in a way you can’t for other platforms. It has a huge discoverability factor. If you’re not growing it’s time to go back to the drawing board and see what you can do, not try to skip the steps.

Not Learning the Strategies

There are small things that can impact how well your video performs. For instance, learning which hashtags will go a long way. While I don’t know the optimal growth, I can tell you that using #fyp when posting your fashion outfit might not reach the right people as only a small percentage of people care about that and so you want to hit those right people. Additionally, learning how to do transitions (filming out of app) so that you hit the beat perfectly, or even just putting your words in the right areas so people can read them will make a huge difference. One mistake I also see people doing is uploading their video to Tik Tok and then using the same song, but not going with the pre-used music and uploading it as if it’s a new song. This risks your audio getting taken down as well as limiting your reach. Viral songs are connected so if someone liked a video with that sound they will likely see more videos with that song. Watch some Youtube strategy videos on Tik Tok! They’re pretty simple to pick up!

How I create my TikTok videos in IMovie ##tiktokuniversity ##tiktoktips ##tiktokgrowth

People are already taking Tik Tok too seriously! Who knew this amazing platform would become available with all these different opportunities?! We’re spending too much time analyzing things like it’s the IG algorithm and the only way to do well is understand the system. Sure, it’s an algorithm. One hashtag might have caused it to do better than the other. However, if you’re consistently created fun and engaging videos, that doesn’t matter nearly as much. I’d much rather spend more time coming up with fun videos I will enjoy making, than analyzing the success or lack of success of one videos. Create good stuff and people will come. Have fun! Tik Tok is free to use. There’s so much creativity that comes out from it! I’ve gotten to express myself in new ways! And I’ve learned about things I’ve never known about thanks to the FYP page!

Stress never helped anyone. If you just want to make dances all day because that’s fun and only your friends see it then cool! I’ve made videos that I enjoy just looking back at and laughing with my family because we bonded over something fun! I learned to make Dalgona coffee and enjoyed putting my own little twist on it. Just have fun with it! And if you’re trying to grow your business from it then just keep experimenting! Take it as an exciting challenge! It’s the only way you won’t burn yourself out.

##fliptheswitch the hair was the best ?

Maybe this one didn’t do well, but we had a lot of fun with it! 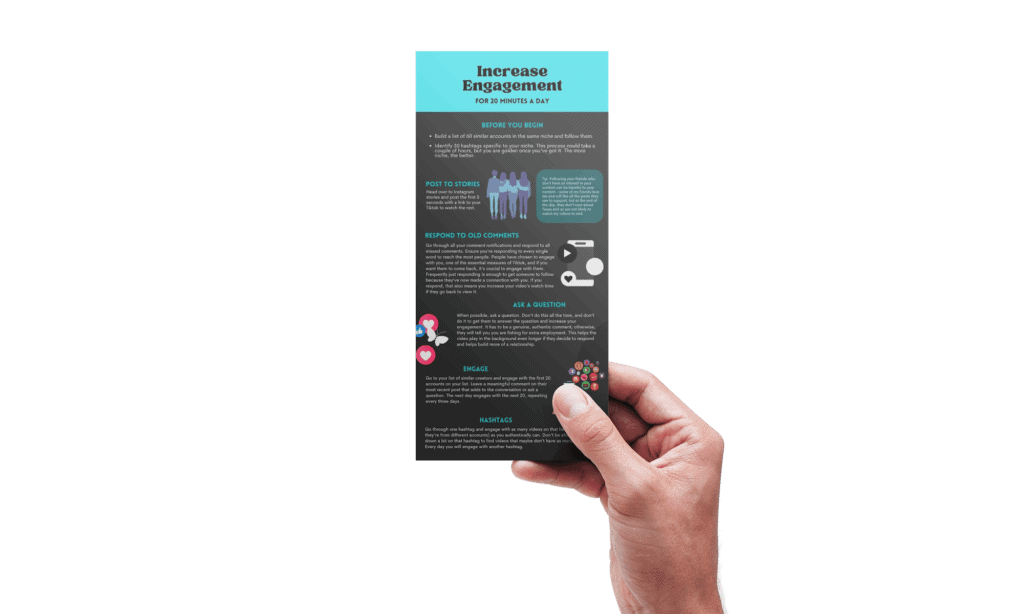 SIGN UP FOR A FREE GUIDE TO INCREASE YOUR SOCIAL MEDIA ENGAGEMENT!

Travel To London From Home

Get the Spanish Intensive Experience at Home

For Influencers – Should I Give Up My Copyright?

Is It Worth It To Participate in Large Giveaways to Grow Your Following?